By persisting with Temba Bavuma, the Proteas selectors are willingly and consciously compromising their chances of winning a World Cup, writes RYAN VREDE.

No Proteas player picks himself. So, in this context, I have sympathy for Bavuma.

He is the product of a selection experiment that hasn’t gone as planned. I supported his appointment as white-ball skipper, arguing that he deserved a fair and equal opportunity to prove himself.

Time has revealed him to be a fine ODI player, but deeply deficient in even the most basic skills required to play T20 cricket at an elite level.

There have been technical interventions from the coaching team. Those have not succeeded. This, then, should be a case of recognising these deficiencies and moving to remedy them with a selection intervention. Instead, it has turned into a story of selectors who lack the ability to admit their mistakes and take decisive action.

They must be held to account for gross incompetence and dereliction of duty. Their refusal to act despite Bavuma’s obvious and chronic struggles amounts to sabotage.

This is not hyperbole. There is every possibility that Bavuma’s failure to contribute in any meaningful way can directly lead to the Proteas crashing out of the T20 World Cup.

Results are often decided by single-figure margins, making each ball matter. Bavuma scored 10 off 15 deliveries in South Africa’s win over India in Perth on Sunday (a strike rate of 66). He hit one boundary in that time – a shot that caught a top edge and sailed over the wicketkeeper for six. He then got out trying to lap a sixth-stump-line delivery over the keeper. It felt like a merciful ending. Another over of Bavuma’s public grappling with the realisation that he isn’t competent enough to play international T20 cricket could have and probably would have cost South Africa the match.

I watched as Bavuma sat contemplating his lot in the dugout. At some level, I felt sorry for him. His humanity was exposed in his brokenness and that resonated with me. But this is a professional sport. Players are paid handsomely with the expectation of a significant return on the investment. In this environment, performance trumps people, as crude as that sounds.

I also feel for the teammates who’ve been asked about their skipper’s situation. To a man, they’ve supported him. What else can they do? They are fully aware of the depth of the struggle. Privately, they must know that there is little hope of snapping a run in which he has only passed 10 runs once in 10 innings.

I’ve toyed with the idea of calling for Bavuma to be honest with himself and his team about his limitations and stand down. But I’ve realised that would be unconscionable for an elite athlete. They are wired to always believe things can and will change in the next match, even in the face of evidence that contradicts that belief.

It isn’t his responsibility to stand himself down. He is getting paid to do a job, and he is not failing because of a lack of effort. Indeed, my understanding is that Bavuma is obsessed with finding methods to succeed.

However, his issue is a lack of competency in this format, at this level. That is clear, and that should lead to a selection intervention that has Reeza Hendricks, who was in excellent form prior to the World Cup, replacing Bavuma, and the captaincy assigned to Keshav Maharaj.

Furthermore, the notion that Bavuma’s place can be justified on the strength of his captaincy alone is perplexing. He is in no way an outlier as a captain. There are equally well-equipped replacements available.

There is no legitimate cricket case that can be built for his retention. That the national selectors have tried to build one on the basis of unfounded hope that he will come good, is shameful and an indictment of their competency.

They deserve the scorn Bavuma has been subjected to.

WATCH: ‘Bavuma is the wrong guy’ 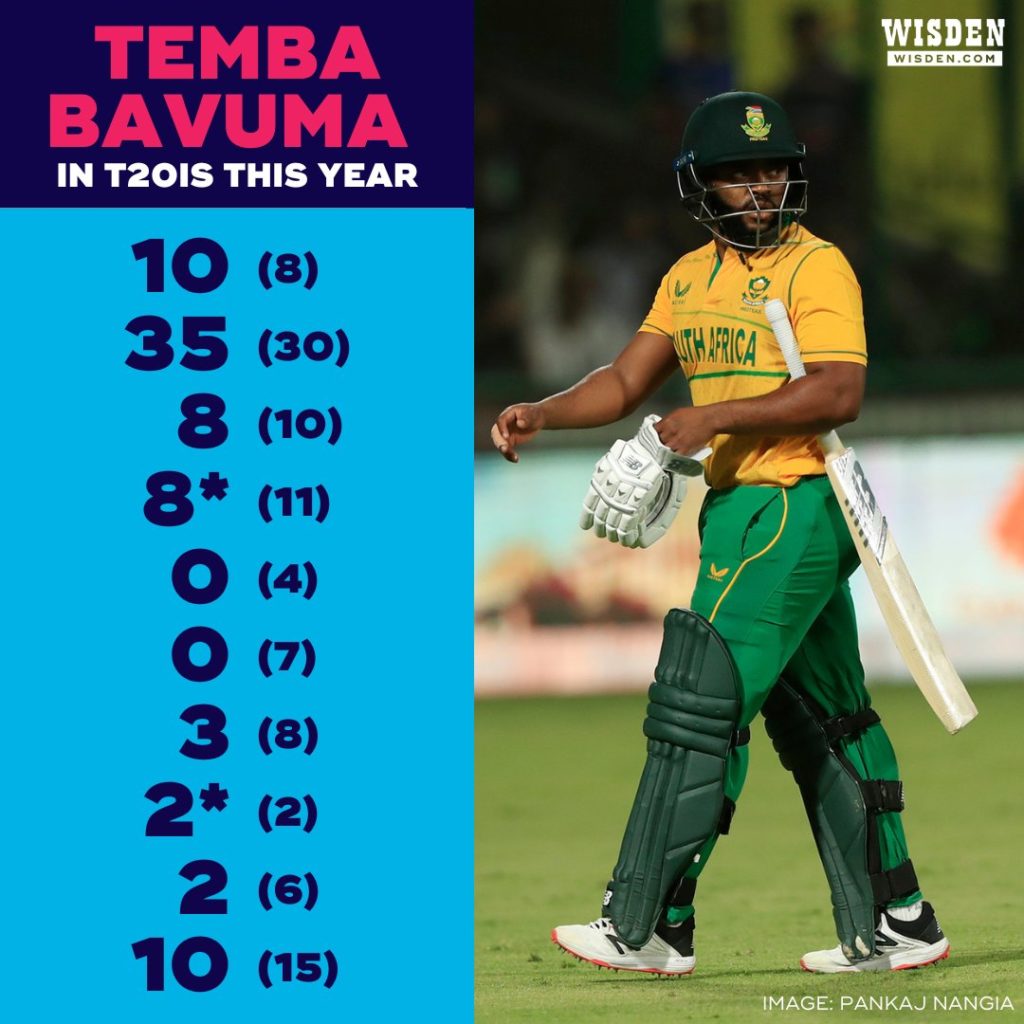 Jean de Villiers on his love for cricket, his 178-run opening partnership with Schalk Burger for the Paarl Gim 1st XI, and the SA20 league.