All you need to know about the match schedule for the inaugural SA20.

Will the SA20 take place during this window every year?
It was important in year one to establish a clear window of mid-Jan to mid-Feb because all SA contracted players will be available, it is prime South Africa summer and affords the league some exclusivity from other leagues. The Proteas have an FTP commitment to tour Australia for Test matches and will only be able to return after 8 January.

How were the fixtures designed?
SA20 wanted teams to have five home and five away matches each to maximise fan engagement and brand identity growth. The fixtures were designed to maximise weekend prime slots with use of double-headers and to minimise weekday matches, particularly avoiding double-headers where possible. The league wanted to ensure fairness across teams as much as possible and player well-being, factoring in rest, travel and back-to-back matches.

What will happen during the ODI series against England?
There is a mid-season break in the league to accommodate the rescheduled bilateral ODI series between South Africa and England which was postponed due to Covid. The league wanted full SA player availability and also wanted maximum access to the England overseas players.

How did the Women’s T20 World Cup affect the fixtures?
The Women’s T20 World Cup is being played in the Western Cape and Eastern Cape from 10-26 February. This affected how late the league can end. Given that Gqeberha, Cape Town and Paarl are the venues for this ICC event and are SA20 teams’ home bases, it meant that their home games needed to be completed by 24 January due to the ICC needing to prepare venues.

What was considered when deciding on match start times?
The league took into consideration fans and families when settling on start times of 13:30 for afternoon matches and 17:30 for evening matches. It was important to also accommodate the worldwide TV viewership audience.

How was the Wanderers selected as the host of the final?
Due to the Women’s T20 World Cup in South Africa, only three of the venues were available to host the playoff matches.

Why is the final scheduled on the same day as two Women’s T20 World Cup matches?
For a showcase final, the league is conscious of player recovery and ensuring that players are rested and can prepare for the final as best as possible. A reserve day for the second semi-final also needed to be allocated in case of rain hence the gap on Friday, 10 February. 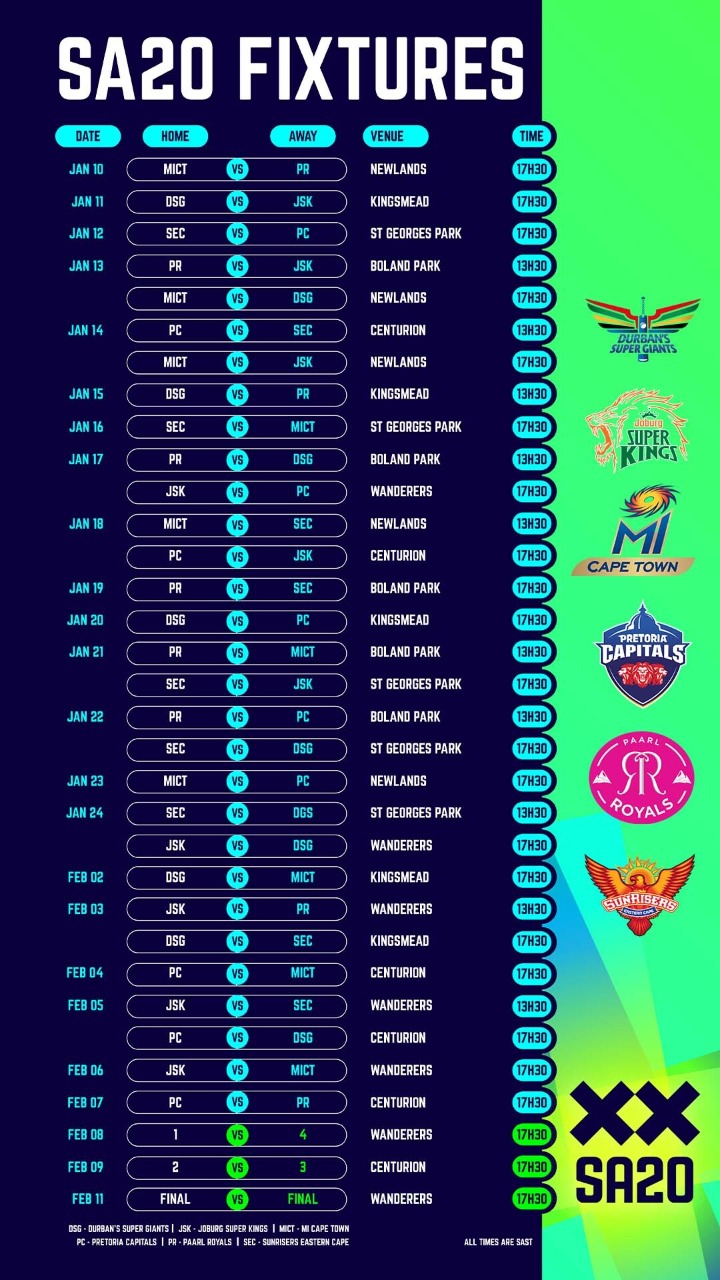