Virat Kohli’s 200 runs at Trent Bridge lifted him back to the number one batsman spot.

The India captain’s superb innings’ of 97 and 103 against England took him to 937 rating points, the 11th best of all time.

The 29-year-old’s man of the match performance helped India claw their way back into the series after being 2-0 down after the second Test at Lord’s.

Kohli ― who claimed the top spot for the first time after the opening Test in Birmingham but dropped to second after the Lord’s Test ― is now only one point behind a group of four in the all-time list and with a good chance of going past them on an incredible run of form that has seen him score 440 runs already in the series. 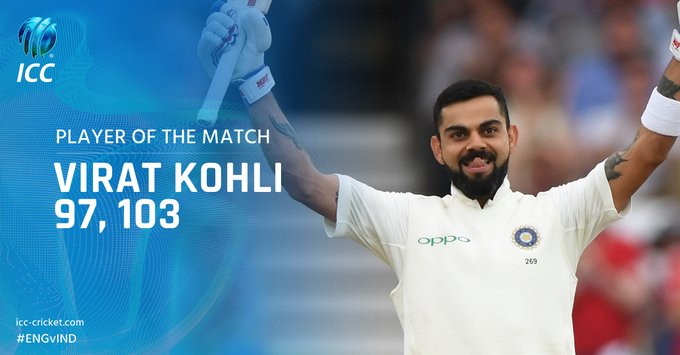 Cheteshwar Pujara remains the second highest ranked India batsman in the list, in sixth position, while Ajinkya Rahane (up four places to 19th), Shikhar Dhawan (up four places to 22nd) and all-rounder Hardik Pandya (up eight places to 51st) have moved up after useful contributions at Trent Bridge.