Proteas coach Mark Boucher has released a public statement around accusations levelled at him during the Social Justice and Nation Building (SJN) hearings, while offering a “sincere apology for any real and perceived inappropriate behaviour by me”.

ALSO READ: ‘Boucher has been open over racism allegations’ – Bavuma

Proteas coach Mark Boucher has released a statement where he wishes to clarify his position regarding the #SJN Hearings. He has also offered a “sincere apology for any real and perceived inappropriate behaviour by me”. pic.twitter.com/ldaMVMLy33

Boucher further stated that while he “can categorically say that did not give Mr Adams the name ‘brown s***’ and “does not know who gave him the name,” he admitted he was part of a group of players that sang a song in which Adams’ was called “brown s***” at fines’ meetings.

Boucher also conceded that some of what took place at those post-match celebrations was “totally inappropriate, unacceptable and in retrospect, understandably offensive”.

The Proteas coach added that he “deeply regrets and apologies for the part I played in joining in with my team-mates in singing offensive songs or using offensive nicknames.”

Boucher also says he shared a room with Paul Adams and Makhaya Ntini ‘on the odd occasion’ and is hurt by media and social media insinuations that he’s a racist. ‘The colour of our skin was of no significance and certainly never an issue to me’… pic.twitter.com/BTgRujSYAK

Boucher says he has addressed the Proteas team before Wednesday’s departure for Sri Lanka because he wants to avoid distractions during the tour… The Proteas will play three ODI’s and three T20’s next month. pic.twitter.com/aNiUTIghRf 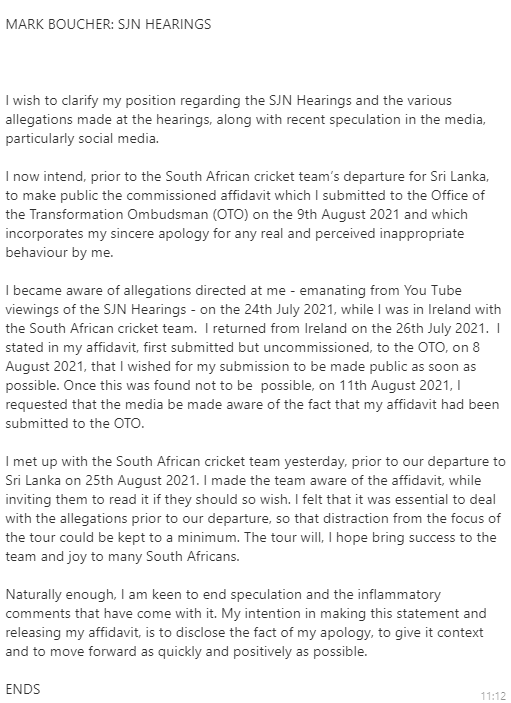