The Proteas’ recent struggles, which include a poor World Cup campaign and heavy Test series defeat by India, have had several pundits rally for the addition of former players to the coaching staff.

While the Proteas have an interim team director in Lions head coach Enoch Nkwe and a suspended acting director of cricket in former coach Corrie van Zyl, the Springboks recently won the World Cup under the experienced guidance of SA Rugby director of rugby and head coach Rassie Erasmus.

‘I see plenty of Rassies around. I’m pretty sure Enoch will be the first to say, “I’d love to have the experience and inputs of a Mark Boucher, Jacques Kallis or Graeme Smith.” Get those guys involved. It’s a no-brainer,’ said De Villiers.

‘There weren’t too many good feelings about the Boks a few years ago. And yet they managed to set things right. No one gave the Boks a chance, but they found a way to be stronger together. They believed in each other and they became unstoppable.

‘I’m not sure how those puzzle pieces will fit in and how the ins and outs will work, but one can determine that.’

England benefited from the appointment of former captain Andrew Strauss to the director of cricket post. Strauss was instrumental in correcting England’s wrongs after a poor 2015 World Cup campaign. They won the title in 2019.

‘Have a vision. They have done it before and work on a three- to four-year plan like Andrew did in the United Kingdom,’ added De Villiers.

Kagiso Rabada put his name on the Lord’s honours board by taking 5-52. Watch all five wickets here … 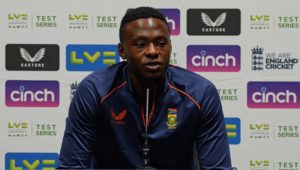 Watch: ‘We got rewards for putting ball in right areas’

Kagiso Rabada on recovering from an ankle injury and his early success with the ball at Lord’s.